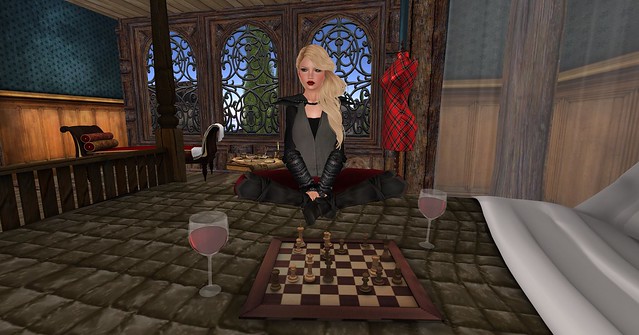 Let me start off by saying that I love my bed. Like really love this bed. I have this strange thing where if an item comes with adult poses, I have to buy the adult version. For some reason I don’t care that the cuddle version is a good 1,000L cheaper. I will have to buy the adult version. This best cost me a fortune. BUT OMG I LOVE IT! Its got naughty poses, and not so naughty poses, and just fun poses. Plus it works in Gor.. which is good because I swear everyone has the same furniture “on this planet.” Oh yeah… Buts by Dutchie… go check the store…. its AWESOME!

I have to say that I truly am sorry that 9/10 times when I write a random post it takes place in my Gor home. But its where I spend most of my time and sadly I don’t often explore outside of this sim. Anyways, incase you hadn’t noticed… I am back at CB. They are just crazy. Absolutely insane. And I adore most of them for it. Avari is a great sim, with many people who I am friends with. But CB is just… well its HOME… ya know?

Aki, because awesome and so cute, gave me a big house! (I know shocking. It was the 2nd big house given to a non-officer. And well Im not counting the first one because it was big for an officer originally… who had moved out of it.) SO I FEEL SPECIAL!

HOWEVER, I DONT LIKE BIG HOUSES SO I SHRUNK IT!
But it makes it different than everyone else so I like it!

Now that I have talked yal to death… I am going to talk some more and do Ms. Strawberry’s Weird Questions Meme. (I have to admit I am kind of a fan girl when it comes to her. I love love love her blog to pieces!)

Which was the last sim you visited? Ripped Wrinkled Shop: Looking for a good mesh monkey avatar… I seriously need one.
Does your avatar look like the real you? Well we are both blond, both short, both have round faces, both have cute stubby noses, both have small hands, but I would have to say… not really.
Do you wear underwear/panties underneath your clothing when out and about on the grid? Well sometimes I am running around in just my underwear. I have this black set from WWI that I simply love and when I go clothes shopping I am generally only wearing that. However… being in Gor… I do sometimes wear it underneath… too many people want to strip you when they cap you.
If you won a million linden dollars, what would be the first thing you buy inworld? A sim. But really a million Ls would only get me a few months of the sim… so maybe lots and lots of clothes.
Have you ever bought something in SL and then realized afterwards that you had already owned it from before? WAY too many times.
Have you ever done anything in Second Life that would be considered illegal in real life? Yes, and no I am not expanding.
If you could go out on a date with any other avatar, who would it be? I honestly don’t know. I think I would forgo the date and have a girls dinner instead!
Who, in your opinion, was the greatest avatar to ever slive? ummmmm
What is the most embarrassing thing you’ve ever done inworld? I got drunk last night, and capped, and my captor stripped my poor Pushka and put her into a diaper… which I ran around in for a while.
If your avatar had a mind of its own, what do you think it would say to you? You really need a life.